NASHVILLE, Tennessee –  Adam Ernst and Michael Rotundo make up the duo After Midtown.

Ernst grew up in Pennsylvania about two hours outside of Amish country while Rotundo hails from Trenton, Ohio.

Ernst was into metal and rock while Rotundo was more of a punk rocker, but they both loved modern country.

Ernst likes everyone from Metallica to Billy Currington. Rotundo’s favorite band of all time is Chemical Romance. However, both allege that Avenged Sevenfold’s City Of Evil is their all-time favorite album. That record connected them and you can hear its influence in their music.

Ernst stated that his family is/was very supportive of his pursuit of a musical career. However, Rotundo’s family was apprehensive when he advised that he wanted to pursue music as a career.

He admitted, “The success rate there is pretty low.”

Ernst concurred, “It’s not a normal thing to do when you come from the towns we do.”

Yet creative people tend to find each other. The duo came to life after gigging together as solo artists and discovering their prodigious chemistry as vocalists, songwriters, instrumentalists, and maybe most importantly, being two small-town guys with a passion to write great songs.

Rotundo explained, “I actually needed a guitar player for a string of shows in the summer of 2019.” A mutual friend introduced him to Ernst.

They played a few shows together where he quickly learned Ernst was “much more than a guitar player.” They soon became best friends and started writing music.

Rotundo continued, “[Ernst] plays every instrument at a professional level. He could play on anybody’s tour that he wanted to right now.”

They started playing cover shows together and found out they could harmonize well. Rotundo has a gravely, rock sound while Ernst has a more mainstream pop/country style. They would trade singing lead based on what the songs demanded.

When they were on the road as a cover band, modern country was often requested. That spurred Rotundo to pay more attention to country music. 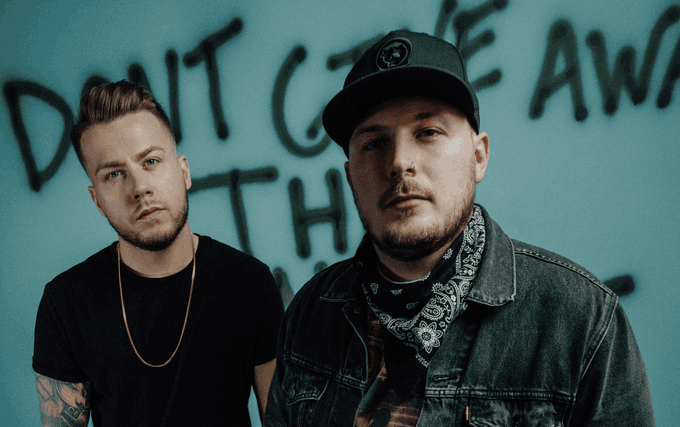 Furthermore, both were writing songs separately before they met each other.

Ernst said, “We both have super different writing styles as well. That is kind of what brings it all together and we meet in the middle with the songwriting.”

“It was a beautiful blend that was never intended but it works,” added Rotundo.

When picking a band name, they wanted to somehow incorporate their names. They often played a club in midtown, Nashville, near Vanderbilt. When they got done playing the bars were often closing. They were still amped up from performing. They would ask friends casually, “Where are y’all headed after midtown?” That became their name and it worked because now their logo also incorporates the initials of their first names, Adam and Michael.

Both recently signed a booking deal with CAA, a publishing deal with Sony/ATV and are managed by a strategic partnership between The Core Ent’s Chief Zaruk, Simon Tikhman, and 10th Street Ent’s Scott Frazier and Chris Nilsson.

Even with their modern edge, After Midtown has not forgotten country’s roots. With their new EP, Don’t Give Away The Ending, it is evident that the duo has found their lane.

With songs like “Boys Like Us” and “Raise One To It” lyrically, they are as country as you can get. These songs deserve to be played alongside Luke Combs and Sam Hunt.

Some people in the music business have a highly inflated ego and their music reflects that. With their debut single, “Boys Like Us, ” the duo wants people to know that they are just ordinary guys no matter what happens to them.

Rotundo declared, “You can still be a regular person and make good music.”

Recently released, “Ain’t Doing Something Right” is the feel-good party song of the summer.

Even with the hip-hop beat, when you hear the lyrics, If you ain’t high as an old Georgia pine/ Swaying to some country music/ If you ain’t holdin’ a cold one and throwin’ ’em back/ Slap you one in your koozie/ Party like you just got paid, a lot of hell is set to be raised/ On a sideways Saturday night/ Man, if you ain’t tore up like an old farm truck/ Then you ain’t doin’ somethin’ right, you know this song belongs on country radio.

“We just want to be real and we keep that in mind when selecting songs to cut,’ stated Ernst.

The pair shows their serious side with two breakup songs, “One of Us Had to Leave” which they wrote, and “If We Ain’t Us” composed by Liberati, Warran, and van Houten.

Ernst explained, “Mikey and I both had similar stories when we left our hometown and (previous) relationships.”

“Our towns only had one bar. If you don’t want to see this person’s face everywhere you go, then you better leave. ‘One of Us Had to Leave’ is one hundred percent real and about our lives but it is also very telling about why we moved to Nashville,” confirmed Rotundo.

There are so many talented songwriters in Nashville and they know that they are just two of thousands.

“If you think you are a better songwriter every day of your life than all these other talented and accomplished songwriters, you’re just simply wrong,” affirmed Rotundo, “Me and Adam, we feel we are OK at [songwriting] but we are humble guys and if somebody pitches us a song and it is right for us, we have no problem with cutting it.”

Because they are so gifted musically, they know what they are doing when they incorporate different styles and genres into the songs they write. Their music is purposeful and meaningful.

Ernst expounded, “What we write is so specific to us, not only in the duo sense but stylistically too. [The songs] are so ‘us’ that it is hard to give these songs to other people, but if we don’t cut [a song we wrote], we would love someone else to cut it.”

Their plans for the rest of the summer is to “tour, tour, tour”. Their favorite thing in the world to play shows.

“The music videos are cool, the social media is cool, but at the end of the day, we feel that if you can’t put in front of 10,000 people who have no idea who we are and we can’t make all 10,000 of those people fans by the time that they leave than what are we doing this for?” asked Rotundo “That’s the payoff for it all.”

You can catch After Midtown at the Blended Festival on August 14 at First Horizon Park in Nashville. To see them in Nashville and other cities, click here to get tickets.