NASHVILLE, Tennessee – Sadie Campbell grew up in Pritchard, BC, in a town so small that it had just one general store. There, she sang in the church choir where, she states, she had crippling stage fright. However, she used music as an expression to “help me put my feelings somewhere.”

Campbell explains, “Even though I felt scared to sing, I always felt led to do it because music so much a part of the thread of who I was.”

Growing up, her father had a huge collection of CDs. They listened to a different array of music like the Mamas and the Papas, Brian Adams, Elton John, and the Beatles.

As a teenager, she loved Nirvana, Silver Chair, Sheryl Crow, and Alanis Morissette. The first concert she ever attended was Garth Brooks

After high school, she took off for the open-mic scene in Vancouver at age 17. She got involved in the rock scene there and took a job as a backup singer in a hip-hop band.

However, there was only so far she could go with music in Vancouver. After a big breakup, she wanted to make a life change and she moved to Nashville.

“That is when my whole life changed. I started working with some of the best writers I’ve ever worked with.”

She started playing and singing in the Nashville honkytonks, which she states is “wild and fun.” 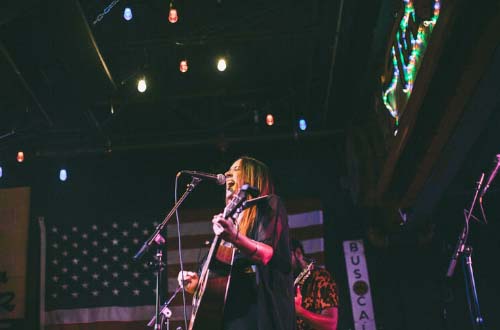 Still, initially the Canadian spent part of her time in New York City, which she described as “electric” and “mind-blowing,” especially for someone from small-town British Columbia. But the community of Nashville is what drew her in.

When she first came to Nashville in 2017, she was a couch surfer and a dog sitter and didn’t have her own place for a year and a half. She lived here until COVID forced her back home.

She made a music video for the song where she admits that she got lost in the desert, met some bikers, and had a lot of fun.

“I’m definitely a gypsy at heart,” she confesses.

One of her early works, “Closer the Edge,” is about being part of a relationship that should have never been. It has an edgy, rock vibe, and is quite different than some of her later releases.

She admits, “The  one good thing about heartbreak and frustrations with relationship, is that it usually brings out some good songs.”

“I Choose Me” is an empowerment song that more closely fits the Americana-country style that she is known for. Not only are the lyrics profound, but also with her raspy Bonnie Raitt style vocals, she draws you in and makes you want to hear more.

Campbell’s blend of Americana pulls from a variety of influences, namely an eclectic mix of female artists of the 1990s, from Lauryn Hill to Alanis Morissette. “Strong women in the music industry have always inspired me,” says Campbell, who cites Sheryl Crow and Brandi Carlile as prime examples. “Strong women that just went out and kept making art — they weren’t waiting for anything and they’re not stopping for anyone. They are my influences.” Her latest EP, Darkroom, due out August 27th, is different from anything else she has previously written or performed.

Three gripping songs track the mind’s disorienting descent into depression. “2020 for me felt like a darkroom,” says Campbell, “It was a lot of isolation and alone time, but it was a place of creativity and development. This project is so real to me, and it’s a little bit of a departure from the country-rock I’d been doing before. It’s a new, deeper, darker side of me I have embraced.”

Already released, the song “Fade” is “about being in that depression and knowing it, and not being able to necessarily control it, but knowing it will pass — you have to ride it out sometimes.”

Recorded at Panfish Studios in Lebanon, Tennessee, the haunting tune pulls you in where you have to listen just to see how the song will end.

In the song, Campbell contemplates, “Am I just scared to go to sleep ‘cause I’m tired of the dreams?” The lyrics are searingly honest, while the chorus drops an upbeat hook that refuses to wallow.

It is the first in the trilogy of songs, which also includes “Aftermath,” and “Euphoria.”

The song “Aftermath” may be the heaviest song I’ve ever written about. It took courage for Campbell to write it and even more courage to release it (on August 27th).

She states, “Even hearing the recording, I put myself back in the day that it was written. It was a really hard and internal struggle.”

The song captures the paralysis that can accompany a desperate need for change in one’s life.

By the third and final track, “Euphoria,” Campbell sings of finally seeing some light at the end of a long tunnel. “It’s about being ready to get out of the dark, being able to imagine my own happiness.”

Darkroom was produced remotely. The songstress advises, “We were just following inspiration. We weren’t trying to make it sound like anything. At the time, I wasn’t even sure if I would ever release it.”

COVID brought to light many mental health issues that people had and were just too busy to notice. But the silver lining, as the artist explains, is that she realized that she does struggle with highs and lows and went to therapy and wrote a lot of songs. She states in her dream world she would “have a heart attack” if she ever got to collaborate with Bruce Springsteen. But also, if the magic wand was waved, she would love to write and sing with Chris Stapleton, Coy Vance, and Irish musician, Hozier.

Once again, plans for touring are tentative. She is scheduled to be a part of Americanafest this year, September 22-25th, and hopes the event will be allowed. She also hopes to be able to tour in the spring.

She counsels, “If COVID has shown us anything, it’s that everything we plan is uncertain anyway. It would be sad to have to do stuff online, but we did it for a year before, and we have to keep rolling with it.”

In the meantime, I will be keeping any eyes and ears out for anything that Sadie Campbell creates. It has taken several years, but the singer-songwriter has a strong sense of self, and the music that pours out of her is meaningful, purposeful, and it will draw you in like a moth to a flame. Watch for the release of Darkroom on August 27th.