NASHVILLE, Tennessee – Jenny Tolman is one of the rare country musicians who was born in Nashville, Tennessee. Her father, Steve Tolman, was a touring musician before her birth. Her dad sang and played the character of Diamond Jim at Disney’s Diamond Horseshoe Resort. Later he worked at Burt Reynolds Dinner Theater in Jupiter, Florida. He was also part of the Indian River Boys quartet. The quartet moved to L.A. for a few years and eventually ended up in Nashville, where they sang on Garth Brooks’ No Fences album.

Once Steve Tolman settled down and had children, her sister Katherine and later Jenny, he moved to the business side of music where he produced corporate events. 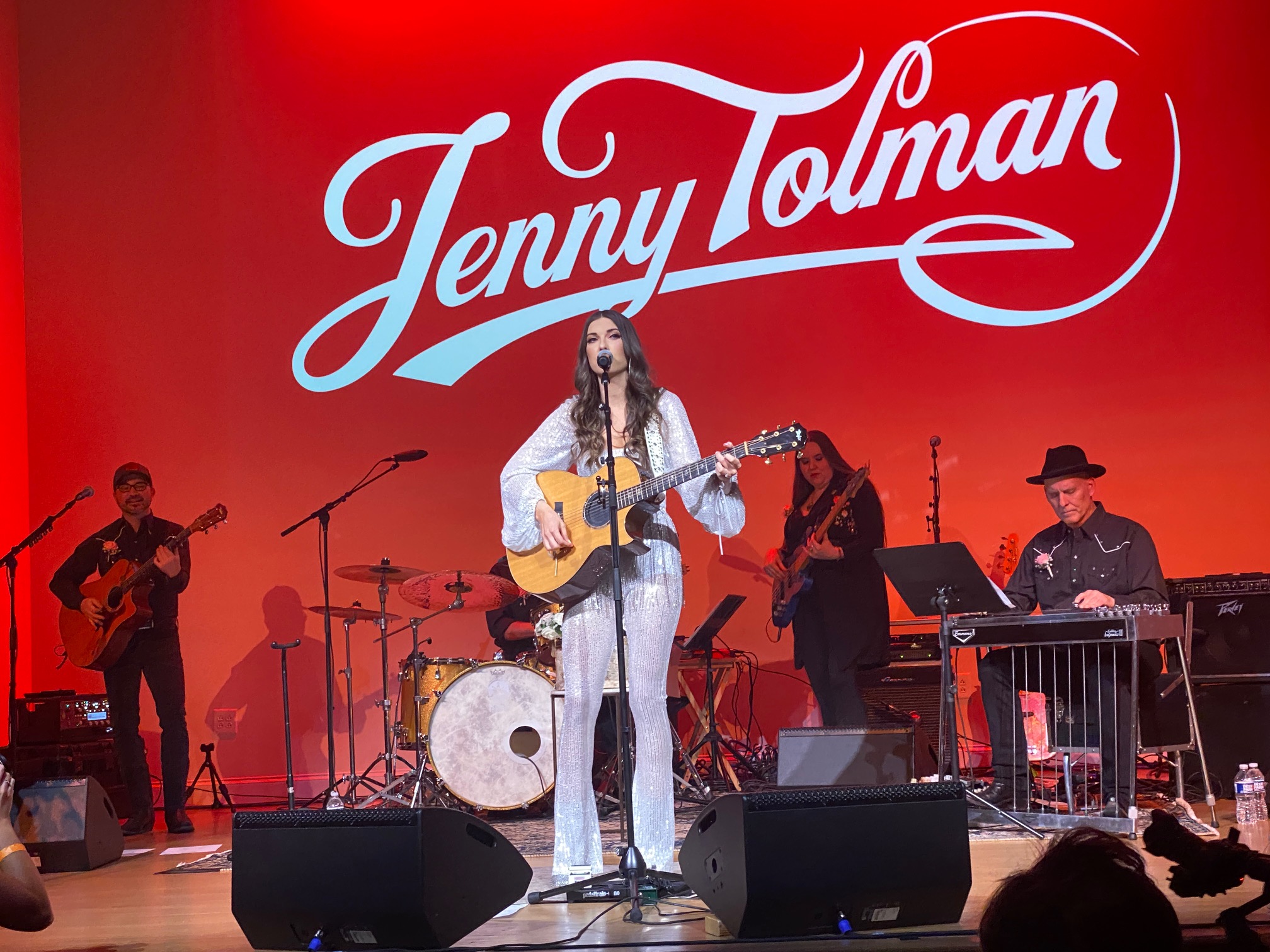 Getting to grow up going to different musical events (like the Opry) and meeting the artists led Tolman to believe that it was just “normal.” It wasn’t until she got older that she realized everyone doesn’t grow up in the music industry.

“It definitely was a big shaper to my life, being born in Music City and having a very musical dad. I’ve been singing for as long as I can remember,” recalls Tolman.

She has played piano by ear since she was three, and loved to write stories as well. Initially, she considered being a children’s author, as she had great teachers in middle school who encouraged it and let her share her stories with the class.

On her sixteenth birthday, she got a guitar and everything clicked. Taylor Swift was in her heyday, and Tolman thought, “Wait a minute, I can do that. [Country music] was everything I liked to do, making music, singing, and writing stories. There was this light bulb moment where I knew what I was going to do with my life.”

One of the things that drew me to Tolman’s music was the sense of fun that accompanies it. She is one of the few female singer/songwriters who, for the most part, doesn’t take herself too seriously. She writes songs with clever lyrics and knows how to entertain.

Songs from her debut album like “High Class, White Trash” and the title track, “There Goes the Neighborhood,” take one back to the glory days of the “Harper Valley PTA.”

Tolman started writing with producer Dave Brainerd and others above the Dog House near Music Row. He heard her singing and liked her style immediately and wanted to collaborate on future projects. They worked together for about a year before the “feelings came out.”

Unfortunately, in September 2015, Brainard and a friend were brutally attacked and left for dead on the streets of Nashville. As Brainard laid in a hospital bed with a broken jaw, a mouth full of shattered teeth, and multiple facial lacerations, Tolman’s phone began to ring. Hearing the news about Brainerd gave her an epiphany.

“That’s when I realized that he wasn’t just a good friend. He was my person,” the aspiring country music singer confessed. 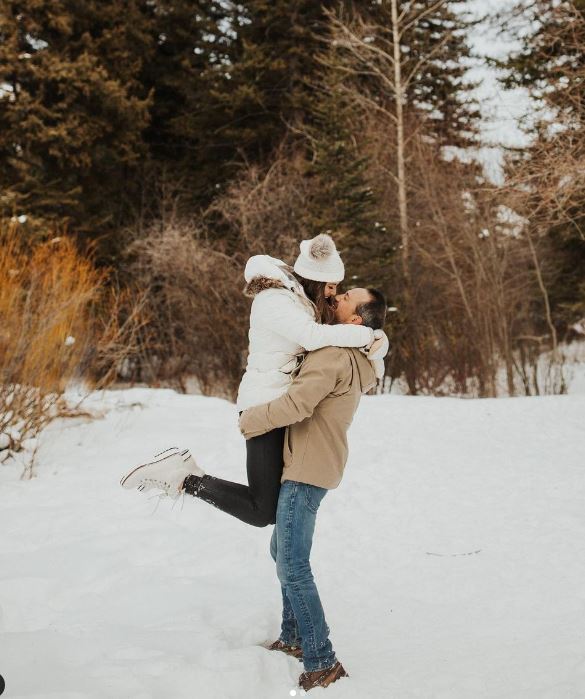 She continued, “I know it sounds cheesy, but it affected my soul and I had to be near him.”

When she realized how much she cared for Brainerd, she wrote the song “Afraid.” He was her producer and was twice her age. Tolman had no idea if he reciprocated her feelings or not.

She shared the song with Brainard immediately and he love it, but Tolman didn’t tell her producer that the song was about him. They even recorded an acoustic version of the song before they were together.

A few months later when they both admitted their love for each other, Tolman was nervous to tell her parents. However, her mom, Kathy, had been secretly hoping the pair would get together, and it didn’t take much for her dad to get on board.

“Truthfully,” Tolman states, “He is young at heart and I’m the old soul.”

After four years of dating, in October 2020 on a trip to Jackson Hole, Wyoming, Brainard proposed.

The whole event was chronicled in a special engagement article in People magazine.

While many of Tolman’s songs are character/story-songs with humor in them, “Afraid” which she very recently released her Jennyville fan base is quite different.

She confirms, “Because it is so different than anything I have put out, it’s resonating a little bit deeper.” 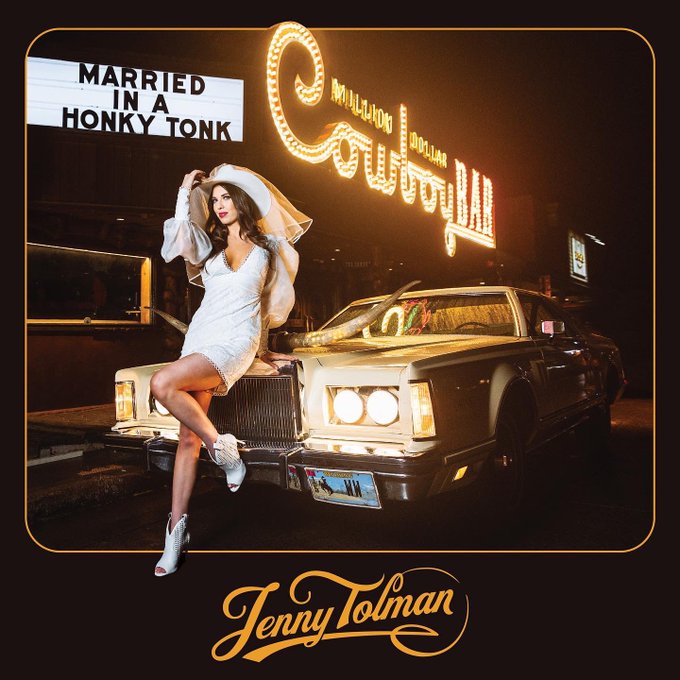 People like being let behind the curtain and seeing what the real Jenny Tolman is like and how and why she fell in love.

“It’s been kind of cool journey, and [my fans] have been included in it,” she explains.

Not only that, as Tolman is preparing for her upcoming nuptials, she was on an episode of the hit series, “Say Yes To The Dress.” Part 2 with her dress fitting will be aired later this fall.

Tolman’s sophomore album, Married in a Honky Tonk, is released today, March 4th, just two weeks before her wedding in Jackson Hole, Wyoming. With the tongue-n-check title track (which may or may not be a tad bit biographical) and songs like “I Know Some Cowboys,” the songstress is gunning to become this generation’s Shel Silverstein. She not only expands on her tales about the fictional town of Jennyville, but she also offers a new depth and range that signals her growing maturity as an artist.

Married in a Honky Tonk is the essence of good country songwriting, and those of us who miss the authentic sounds of traditional country music now have new music to embrace.

Be sure to follow Jenny Tolman on all her socials, because after her March 19 nuptials, she will be back on the road in April. If you think her videos are fun to watch, you’ve got to come to a show because she is even more entertaining in person.