Europe has an energy crisis. Factories are halting operations in the face of soaring energy prices; families are paying 50% more for heating (or opting to freeze in their homes), and  Europe as a whole continues to destabilize its political position by making itself dependent on Russia for natural gas.

Europe shows what happens when you adopt policies based on false ideas—myths about energy that all but guarantee high prices, power blackouts, and a crashing economy. Here are 6 of them: 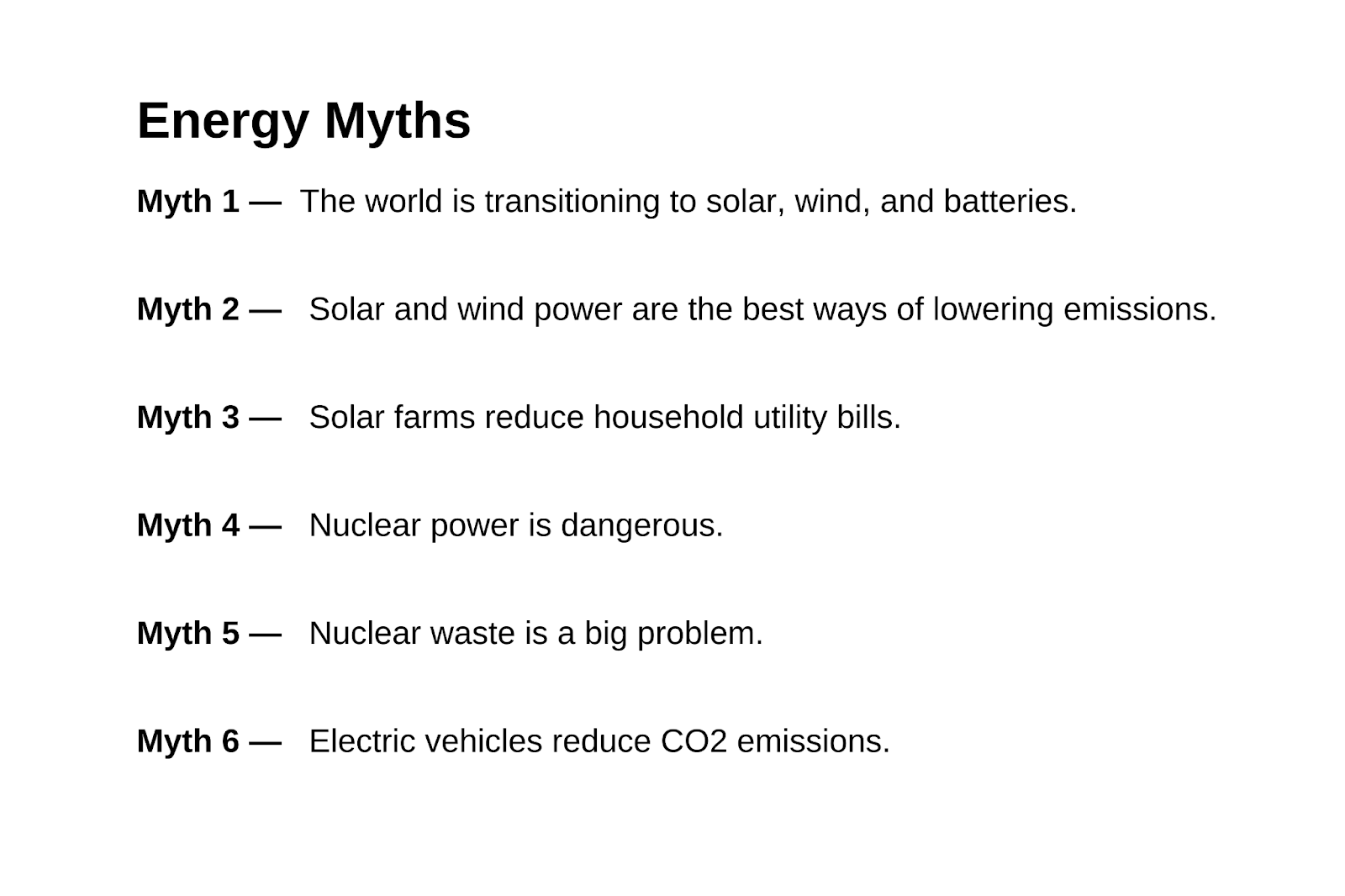 MYTH 1: The world is transitioning to solar, wind, and batteries.

Fact: Solar and wind power are unreliable, raise electricity rates, and over-consume minerals and land. Even after investing $2.7 trillion in them over the last decade, solar and wind still produce 3% of global energy.

Fact: The biggest emissions reductions over the last 15 years have been due to shifts from coal to natural gas. Natural gas produces only 10% of the air pollutants and 50% of the CO2 that coal does.

Proponents of solar and wind power can talk about the potential of these technologies as much as they want, but the reality is—per Myth 1—the world is far, far away from being able to manufacture, deploy, and maintain this tech efficiently.

Fact: Households pay more for electricity where governments mandate solar power: households in the United States (US) pay 11% more in the 29 states with solar mandates; households in California pay 80% more than the US avg; and households in Germany are paying double for their electric bills because Germany spent hundreds of billions of euros on building massive wind and solar farms.

Fact: Nuclear is the safest, most powerful and reliable way to generate low-emission electricity. Only about 200 people have died as a result of radiation from nuclear accidents in over 60 years. This number includes the accidents at Chernobyl, Three Mile Island, and Fukushima.

Even if you count the cancer diagnoses among people exposed to radiation, the harm from nuclear plant accidents remains minuscule in contrast with the millions who die every year from the effects of coal pollution.

Fact: Nuclear is the only energy source that prevents waste from going into the environment. All the nuclear fuel ever generated in the US is safely contained and can fit on a single football field stacked less than 10 yards high.

In fact, used nuclear fuel is not strictly waste because some advanced reactor designs in development could run on used nuclear fuel in the future. More than 90% of its potential energy still remains in the fuel, even after five years of operating in a reactor.

Fact: EVs don’t eliminate emissions; they just shift emissions from the tailpipe to the power plant. If the power source is dirty, so is the EV. More than 50% of new EV sales are expected in China where most power plants are fueled by coal, the dirtiest power source.

Energy Myths Are a Global Threat

Myths like these continue driving bad investments and bad policies. They hurt the poorest among us by weaponizing good intentions.

We all want to feel like we’re making the world a better place. But feeling like we’re doing the right thing doesn’t mean we are. I championed energy efficiency, solar, and wind power for over two decades—first as executive director of a green building non-profit, then as CEO of a consulting firm specializing in clean energy, and more recently as founder of a cleantech startup.

All of this made me feel like I was fighting the good fight to promote people’s wellbeing and protect the environment. But I was wrong. My agenda was harming both. I just couldn’t admit it. My sense of identity was tied to false beliefs about energy, and my ignorance and ideology blinded me to what actually does help the planet.

I see other people making the same mistakes today. Europe isn’t the only place basing policies on these energy myths. California, New York, and New England are doing it too. If the US wants to avoid what’s happening in Europe, we need to see Europe’s example for what it is: a canary in a coal mine. We need to break free of the pernicious influence of these myths. We need to stop taxing the poor with the high cost of false moral comfort, and build an energy system that maximizes human flourishing and minimizes environmental harm.

Here’s how to start:

If Europe takes these steps, it may avoid a new dark age.

Brian Gitt is an energy entrepreneur, investor, and writer. He’s been pursuing truth in energy for over two decades. Follow him on Twitter @BrianGitt and read more articles on https://briangitt.com/