On the day before President Biden announced that he is “forgiving” part or all of the student loans of nearly everyone who owes them, his administration released a legal memo declaring that he had the authority to do this under a 2003 law.

That claim is belied by Congressional records recently unearthed by Just Facts. These reveal that Congress voted to pass the law by a margin of more than 500 to 1 because it did not authorize any actions that would cost money.

In contrast, Biden’s decision to cancel student loans and alter their payment terms will cost from $605 billion to more than $1 trillion over the next 10 years. That amounts to an average cost of roughly $4,700 to $7,700 for every household in the United States. 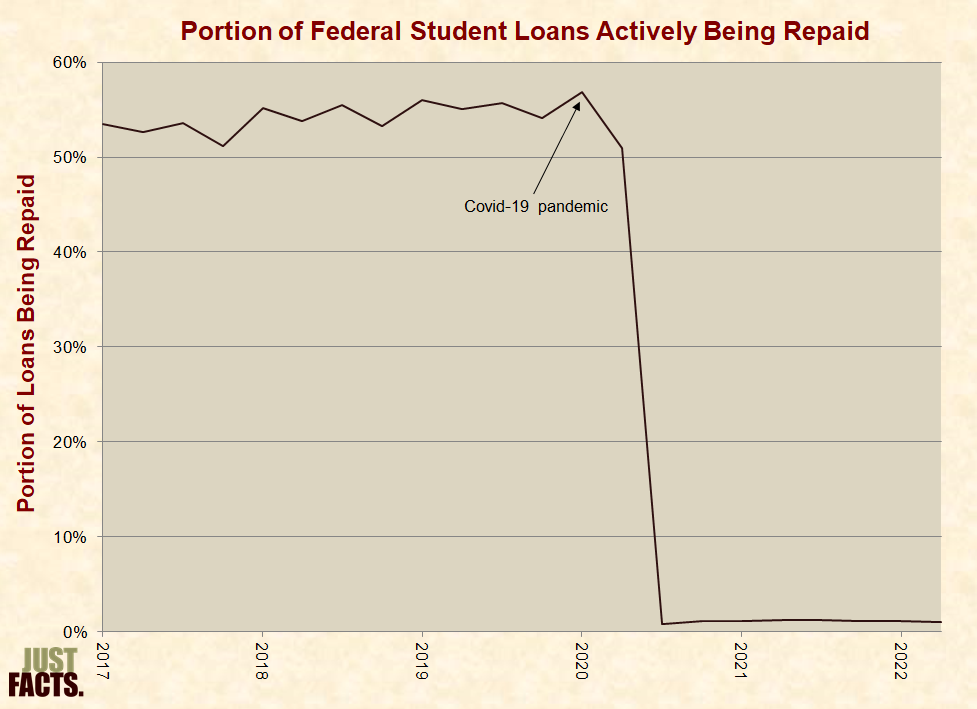 Before this, both Biden and Trump took similarly illegal actions to cancel interest on student loans, costing tens of billions of dollars.

The illegality of these actions is confirmed by the text of the law and Supreme Court decisions on similar cases dealing with presidential power grabs.

When the Covid-19 pandemic began in March 2020, the Trump administration announced that federal student loan borrowers won’t be charged any interest on their loans for “at least 60 days.” The administration cited no legal authority for this decision, but within a week, Congress passed and President Trump signed a Covid relief law that suspended all federal student loan interest and payments for about six months through September 30, 2020.

After that, Trump and Biden extended this policy for nearly two years even though Congress didn’t pass another law to extend the timeframe. Consequently, only 1% of all federal student loans are now actively being repaid:

The U.S. Government Accountability Office estimates that these interest cancellations have cost $102 billion.

In August 2022—after heavy pressure from the left-most faction of the Democratic party and falling support from young voters—Biden announced that he is:

On the day before Biden announced those actions, his administration released a legal memo declaring that he had the authority to do all this under the Higher Education Relief Opportunities for Students Act of 2003, or “HEROES” Act.

The HEROES Act of 2003 was sponsored by Republican John Kline of Minnesota, who had served 25 years as a U.S. Marine. When he introduced the bill in the House of Representatives, he declared that it would help “the troops who protect and defend the United States.”

At that time, many college students and recent grads who were members of the National Guard and Reserves were being deployed to carry out Operation Iraqi Freedom and anti-terror operations in response to the slaughter of 2,977 people on 9/11.

Stating that the bill was “simple in its purpose” and “specific in its intent,” Kline explained that it will “assist students who are being called up to active duty or active service” and those who are impacted by “a war, military contingency operation or a national emergency.” He also emphasized that the bill would do this “without affecting the integrity” of student loan programs.

Demonstrating just how simple and specific the bill was, the official legislative record shows that the House of Representatives passed it by a vote of 421–1 with only “forty minutes of debate.” The Senate then passed it “without amendment by unanimous consent.” If all 100 senators were present, this is a margin of 521 to 1.

The only legislator to vote against it in all of Congress was George Miller, a Democrat from California.

What took place during the 40 minutes of House debate is even more telling. A transcript of this debate was recently unearthed by Just Facts, and it shows that the bill did not authorize any actions that would cost money.

Kline opened the debate by having a clerk read the text of bill. Kline then stated that the HEROES Act would relieve financial burdens on soldiers “while they defend our nation” and again emphasized that it will do this “without affecting the integrity” of student loan programs.

In response, Democrat Tim Ryan of Ohio noted that under the bill, the “interest” on these loans “will still be accruing; so this is a great first step, but I think we can do much better.” He then recommended that Congress pass an additional bill that will pay for this interest. “I have a bill that is the Active Reservists and National Guard Student Loan Relief Act which would do this,” said Ryan, “and I think we should look into it.”

After a few others spoke, Ryan explained that “under the current legislation that we are dealing with,” a reservist in his district named Krista Rosado who was called to active duty for up to two years “will accrue over $1,400 in additional interest on her loan. So when she does get back from service, she will owe this money.” He then stated:

Republican John Boehner of Ohio then replied to Ryan that “we have worked on his important addition to this bill, but under the 1973 Budget Act we are required to find offsets.” This means that other spending must be reduced so that the bill doesn’t increase the federal deficit.

Boehner then added that Ryan’s bill would cost about $10 million and “we will continue to work with you to try to find these offsets under the Budget Act so that we can, in fact, bring this bill to the floor.” Ultimately, Ryan’s bill never passed.

That exchange, along with many other statements during the debate, prove that the HEROES Act only allowed for the deferral or forbearance of student loans—not the cancellation of interest, much less cancelling the actual loans. These actions cost money, thus impairing the integrity of the program.

The debate also reveals that the bill applies to active-duty soldiers and people who are specifically harmed by a national disaster, not virtually everyone who owes student loans.

A few excerpts from many statements in the debate that confirm the above include the following:

The text of the HEROES Act mirrors the debate. It states that the law:

Confirming the illegality of Biden’s and Trump’s actions, the U.S. Supreme Court has a issued an array of rulings that have addressed similar power grabs by federal agencies under the authority of presidents. These include but are not limited to:

Biden administration officials have repeatedly dodged questions about who will pay for Biden’s actions, but the fact is that when people don’t pay back student loans because politicians “forgive” them, this debt is transferred to other people who did not borrow the money.

In the words of the U.S. Government Accountability Office, “When borrowers do not make payments on their federal student loans, and the loans are in default, the federal government and taxpayers are left with the costs.” 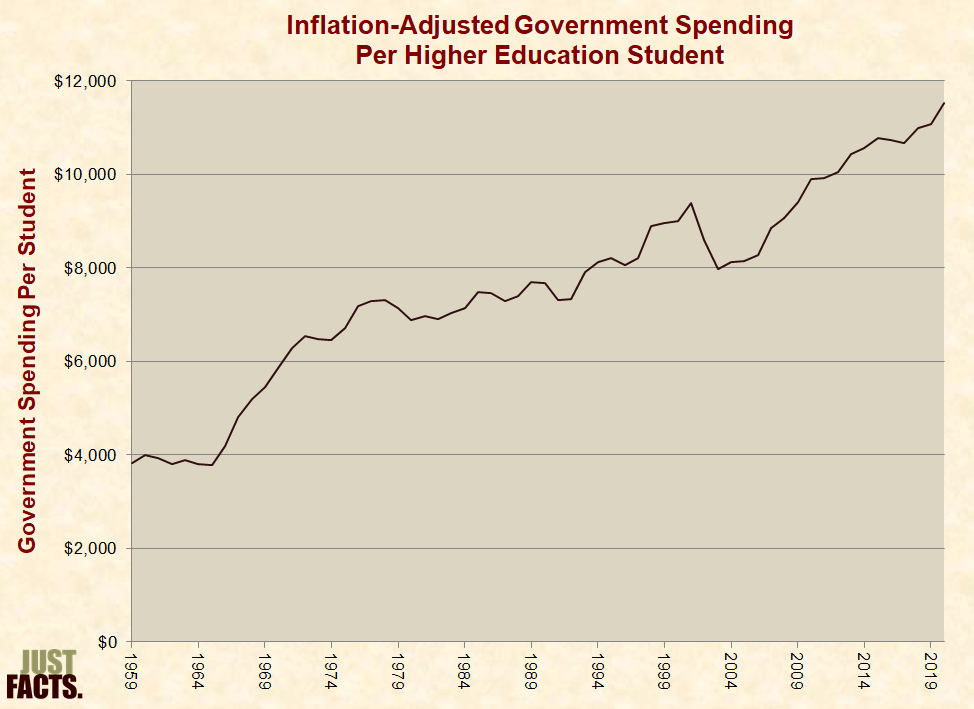 The Penn Wharton Budget Model estimates that Biden’s student loan cancellations and payment reductions will cost $605 billion to more than $1 trillion over the next 10 years. This amounts to an average cost of roughly $4,700 to $7,700 for every household in the United States.

Those costs will not be equally borne because some households pay far more taxes than others. However, even people who don’t pay taxes will suffer the consequences of this spending. That’s because the government is running massive deficits, so this money will be added to the national debt, which can manifest in inflation, reduced standards of living, lower wages, or combinations of these and other harmful results.

Those costs are in addition to ongoing taxpayer funding of higher education, which exceeds $200 billion per year. Contrary to the claims of Elizabeth Warren, Bernie Sanders, and certain media outlets, average government spending for each college student has risen by 2.9 times per student since 1960, even after accounting for inflation:

Over the same period, colleges have greatly reduced academic loads, significantly inflated grades, and failed to instill practical and literacy skills in large portions of their students.