According to a press release from the nonprofit coalition of citizens working to restore election integrity in Georgia, “before and after” screenshots of interim election results reported by Georgia Public Broadcasting (GPB) for the 2022 General Election “show the inexplicable decrease for Herschel Walker.”

A sworn affidavit by Gina Stone, a Chatham County resident who witnessed the reporting irregularity on Election Day evening while watching GPB, states, “At 10:01pm Herschel Walker had 1,551,534 votes and Raphael Warnock had 1,518,513 votes.”

Stone’s affidavit corroborates another from Janet Martz, a Paulding County resident who witnessed an almost identical vote drop in Walker’s results reported on WSB-TV at the same time.

Both affidavits are further confirmed by the media line feed of election results provided by Edison Research. That line feed, made available in 2022 by CNN, also shows a similar, even greater decrease. The decrease was not reported on the line feed until over a day later, indicating that line feed data may have been manipulated.

“The 20,000+ vote decrease varies slightly depending upon the time slice of the interim election results that are being reported,” the group noted. “It was not enough to make a difference in whether or not there is a runoff in the U.S. Senate race set for Tuesday, December 6, 2022.” 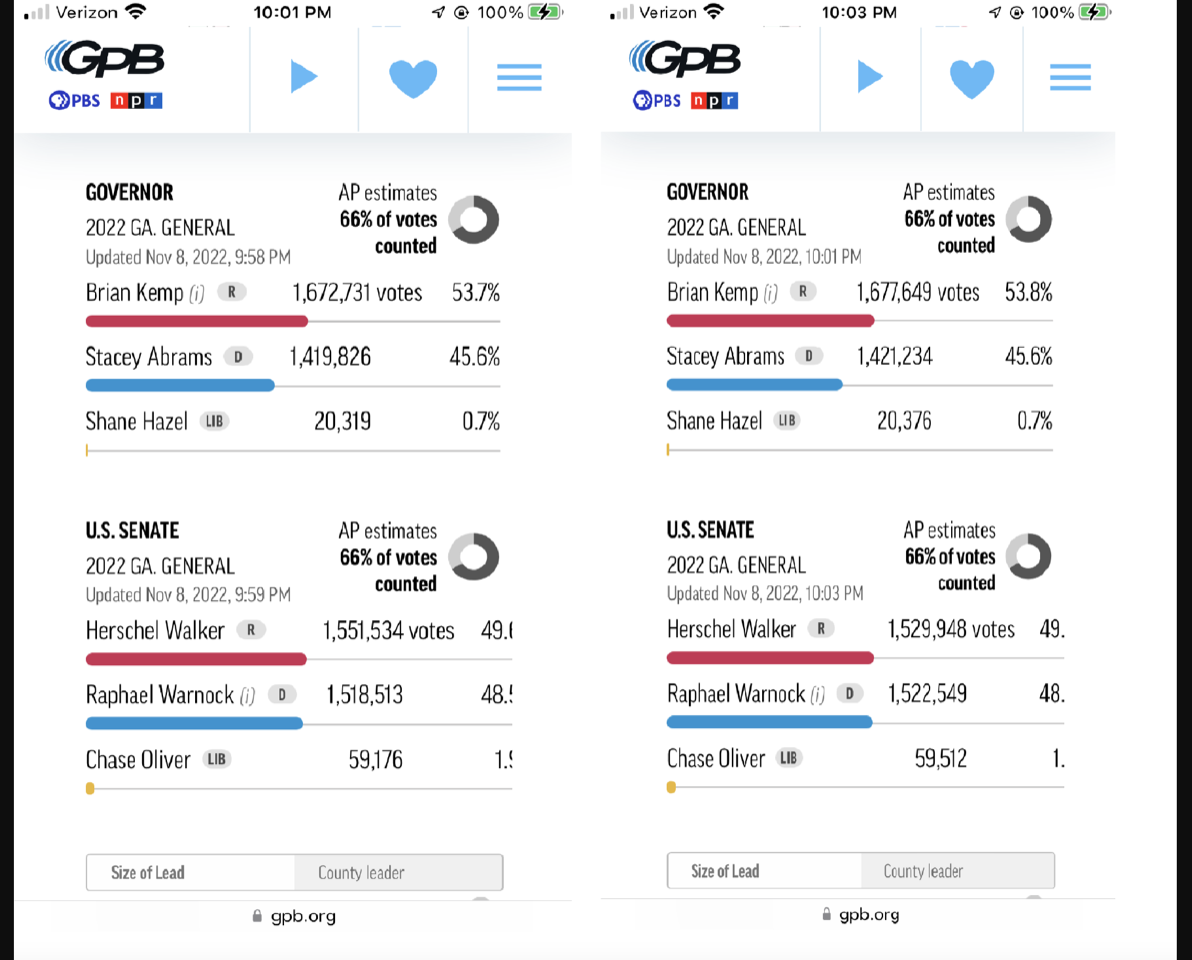 The Star News Network reached out for comment to GPB and is awaiting a response.

According to VoterGA, a WSB-TV election worker informed the organization, “We get our data from the Secretary of State’s (SOS) office.”

The SOS office receives election results from most Georgia counties indirectly through third-party election reporting software known as Clarity Elections. That product was purchased from Scytl owned SOE software out of Tampa, Florida by Gov. Brian Kemp when he served as SOS. The software also provides the results for the media line feed.

“There is no technical explanation I can see for one candidate’s vote totals to decrease dramatically during an election especially when his opponents’ totals are increasing at the exact same time,” said VoterGA co-founder Garland Favorito in a statement. “We are concerned that this indicates some type of electronic vote manipulation that the office of the Secretary of State is unwilling to investigate and explain. That puts the runoff at risk of the same problem.”